This International Women’s Day, we thought we would celebrate by not only appreciating the inspiring women of the world, but by taking a look into their iconic jewellery collections too! From Princess Diana to Lizzo, let’s take a look at some of their beautiful jewellery whilst sharing love for inspirational women at the same time.

When Princess Diana married into the Royal Family, she chose not to sit back and relax. Instead, she decided to use her Royal Family status to help and inspire as many people as possible. She became the figurehead for charity campaigns around the world. She didn’t want to keep her wealth, she wanted to use it to help others, which is why the world was torn apart when she died in 1997.

Diana’s self-chosen sapphire and diamond engagement ring caused a lot of controversy at the time, as it was not traditional for a sapphire to be used in an engagement ring. Diana didn’t care though – she chose what she loved and encouraged many others to do the same.

Get Princess Diana’s engagement ring look with these sapphire and diamond rings:

Oprah Winfrey and her statement earrings

As the first African-American woman to be classed as a billionaire, Oprah has shared her wealth with those who need it the most. She has personally donated over $300 million to charitable causes to help others. Oprah is one of the most successful interviewers of all time, having the ability to emotionally connect with her guests. She is compassionate, caring and charitable.

We will forever be impressed with Oprah’s ever-changing collection of statement earrings. In almost every picture of her she boasts a gorgeous pair of earrings that elevates her look every time. Her confidence with wearing unique earring styles has inspired many to try out their own unique statement jewellery.

Get Oprah’s jewellery look with these statement earrings:

From the outside it may have looked like Marilyn Monroe (born Norma Jean Baker) was a ditzy blonde with good looks and a hugely successful career. But underneath it all Marilyn knew exactly what she was doing. It was no coincidence that she became as famous as she was. She took extensive acting lessons to improve herself because she believed that “women who seek to be equal with men lack ambition.” After her death we discovered that she lived a life long battle with depression and addiction, which is why her success is even more celebrated.

It’s no secret that Marilyn Monroe had an extensive collection of diamonds. If a jewellery piece included large, beautiful diamonds, Marilyn will have worn it! The most famous diamond she has worn was called the Moon of Baroda, which was given to her by Meyer Rosenbaum of Detroit, President of the Meyer Jewelry Company. Marilyn wore it for the shooting of the song Diamonds Are a Girl's Best Friend, and also in the film Gentlemen Prefer Blondes.

Elizabeth Taylor and her gemstones

Actress and humanitarian Elizabeth Taylor campaigned to raise awareness of the HIV/AIDS epidemic and find a cure at a time when few people would even acknowledge the disease. She co-founded the American Foundation for AIDS Research (amfAR) in 1985 and set up the Elizabeth Taylor AIDS Foundation in 1991.

Elizabeth Taylor was known for her show stopping gemstones – especially for emeralds which matched her eye colour beautifully. She even went as far to wear her own jewels in her films and photoshoots because she loved them so much!

Get the look with these gorgeous emerald jewellery pieces:

Frida Kahlo and her vibrant collection of drop earrings

Frida Kahlo was unapologetic about who she was, which is why she is still known and loved by many today. As one of the most celebrated artists of all time, she is still remembered as a remarkable woman who persevered despite living through immense physical pain for most of her life.

In every picture of Frida she sports such beautiful drop earrings. Sometimes they’re made from precious metals, sometimes they incorporate bright coloured fabrics and gemstones. Frida is also known for wearing two different style earrings at one time.

Get inspired with these unusal earring designs:

Lizzo and her sassy statement pieces

“If you're a little girl reading this, look in the mirror and remind yourself that this is who you are and she's perfect just the way she is. I know it's cliche, but it's cliche for a reason: because it's true." – Lizzo

Musician Lizzo (born Melissa Jefferson) shot to fame in 2019 when she released her catchy, positive pop songs that inspired the world. Creating a powerful message to women everywhere, Lizzo is now a body positivity, self-love icon. Her viral Glastonbury performance, where she was glorious in a shimmery leotard, resonated with people all over the world with perfectly-imperfect bodies.

To match her sassy attitude and confident style, Lizzo’s jewellery collection is anything but ordinary. Glam necklets, strings of pearls and star jewellery just scratch the surface!

Here’s some Lizzo inspired jewellery pieces if you want to get the look: 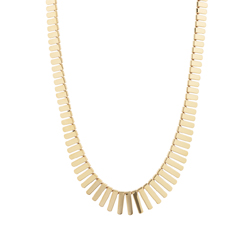