The company was founded in 1953 by three brothers: Juan, José and Vincente Lladró in the village of Almàssera near Valencia. Initially designing and producing vases and jugs using their home-made furnace at the bottom of the garden, it wasn’t until the late 1950’s they moved towards the style of sculptures known today.

As demand grew so did their business, and by 1958 the company relocated to the town of Tavernes Blanques in Valencia (where it is still located today). Soon the brothers employed a growing number of highly skilled sculptors, painters and chemists to increase production whilst also adopting a logo to brand all their figurines.

In the 1960’s a group of Americans discovered the brand when looking for new lines to import. This marked a growing impetus for Lladró as the creations began to be internationally recognised. As an exported good, the word ‘Spain’ was incorporated into the logo to mark its origin. 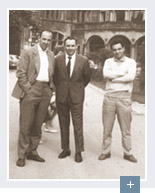 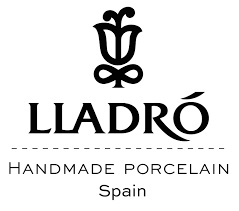 In the 70s the logo changes form once again because of the desire to establish a connection between science and art – the basis of Lladró. Here we see the union between an ancient chemical symbol and the stylised version of a “campanillo”, a typical bell-shaped flower of the area where Lladró was born. The surname of the founders is then printed under this image.

During the 1980s, the company welcomed the next generation, with Rosa, Mamen and Juan Vincente Lladró undergoing lengthy apprenticeships before assuming responsibility in the company, including the tasks of the creativity committee. It is during this time that Lladró become popular worldwide, with strong ties in Japan, China, Australia, the United States and the United Kingdom.

During this decade the brothers opened a Professional Training School, this being somewhere in which they could pass on their creative spirit. Work also began on the ‘City of Porcelain’; an area combining the factory, design studios and office buildings complete with sports and leisure facilities for the workers. Lladró currently employs 2,000 people on this site.

The City of Porcelain in Valencia 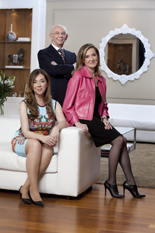 The 1990’s confirmed the success of the artistic and professional career of the Lladró brothers, with their works receiving important awards and being exhibited in several cities throughout the world. The company received the most important acknowledgments to its professional career: the Príncipe Felipe award for Internationalization (1993), for Competitiveness (1997) and for Renown Brand Management (2001), three awards given to the Lladró brothers by the Prince of Asturias and which represent a milestone for the company.

It is not until a decade later in 2003 that after fifty years at the head of the company, the three founding brothers passed over control to the Lladró second generation, which today form part of the new Board of Directors.

Each figurine is lovingly handmade, starting first with the concept idea designed by the Lladró second generation. From initial concept to physical model usually takes up to two years and passes through roughly 50 hands.

Numerous separate moulds are made for just one figurine: depending on the detail and movement required will determine the number of separate moulds. For extremely complicated designs, moulds are often made for each individual finger!

Liquid Lladró porcelain is poured into plaster moulds and left to dry for between ten and twenty minutes. After this time, a thin porcelain edge forms – the excess porcelain is poured away leaving a hollow body part. Core sections of the piece are allowed to dry for longer in order to form thicker and so stronger elements. For example, the bodies and heads are made from thicker porcelain than the more delicate arms and hands.

Once all hollow parts are dry, they are combined using a fine layer of the same liquid porcelain. This is very malleable when wet, but dries quickly so skilled workers have to work swiftly. They smooth any cracks and bumps using fine artists tools to leave an immaculate complete figurine.

Each Lladró employee must undergo a 3 year training programme which teaches them these specialised techniques, and nurtures their most prized skill. Specialisation by each member of staff means they become responsible for only one section along the production line.

When each piece has dried naturally, it can be hand painted. Colours are carefully selected by the Lladró artists to bring life and body to the pieces. Workers can paint up to 20 pieces in one day; however this does not include the face. The infamous Lladró face is devoted to one specialised section of the production line, where facial expressions and characteristics are magnificently depicted by only the expert of artists.

One very dedicated section of the production line is the making of Lladró flowers. Flowers have always had a very important meaning to Lladró, as their creation requires expert hands. Similar to the face painting, a group of artists are exclusively dedicated to this activity, giving detailed and thorough attention to this typical Lladró element, petal by petal. The individual flowers in the piece ‘Flowers of the Season’ take four days alone to create. 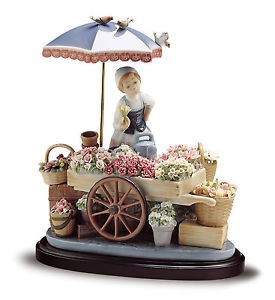 Lladró - Flowers of the Season, 1983. Designer José Puche, approx. £2,300
Once painted, the figurine is sprayed all over in a turquoise-coloured paint. This actually covers the workmanship however gives the piece the wonderful glazed effect when it emerges from the kiln.

The Lladró Museum at the City of Porcelain