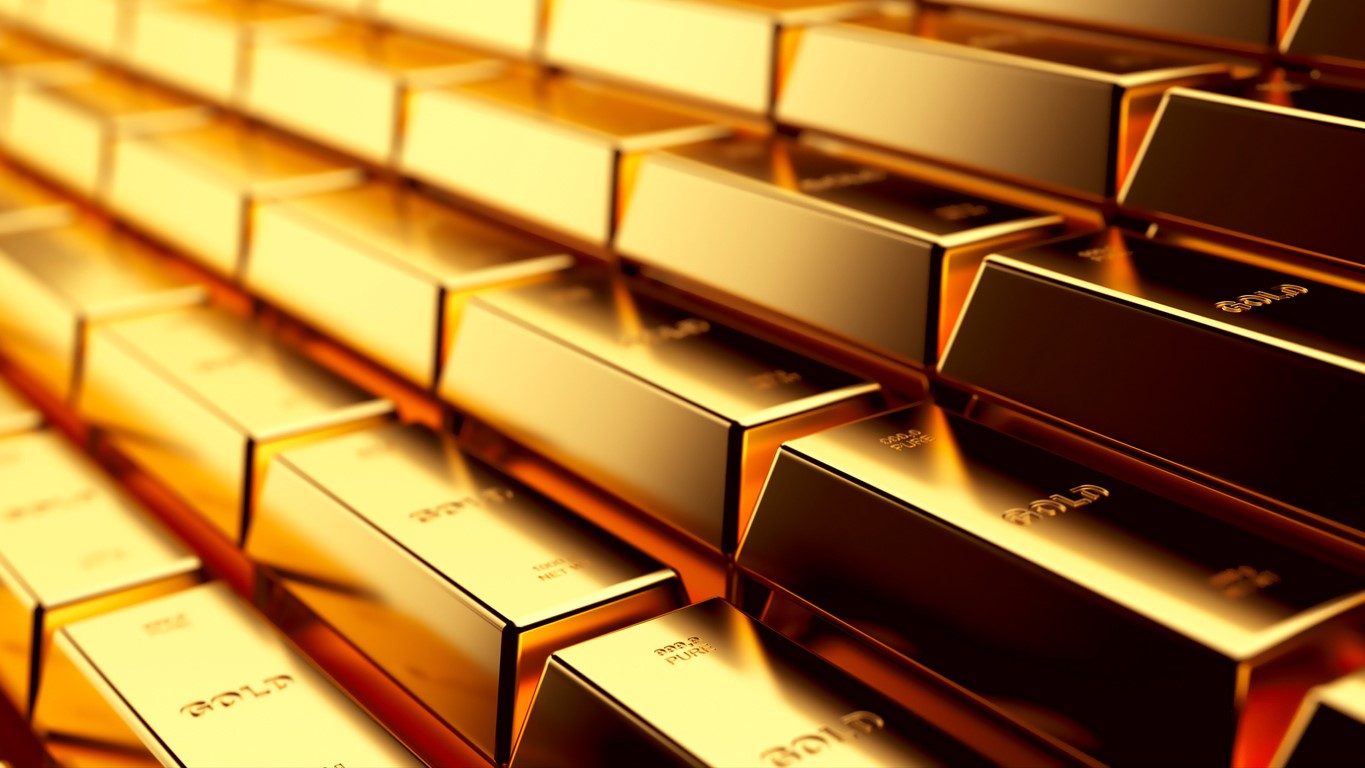 Many people are looking for a way to protect their money in the uncertain economic times that we are currently experiencing. Traditionally, gold has been one of the safest investments to make, yet even gold prices have fluctuated heavily in recent times.

The Royal Mint price for a 1kg gold bar currently stands at £51,035, meaning that someone earning the average UK salary of £30,420 would need to wait 1 year, 8 months and 2 days before they had earned enough to buy just one bar.

Put simply, buying a full gold bar gold isn’t the easiest thing to do as an average Joe. What about the rich and famous, though? We decided to have a look at just how many gold bars the big-name high earners could own if they converted their 2020 earnings into gold.

Unsurprisingly, Amazon founder Jeff Bezos tops the rich list. Having accrued a wealth value of almost £52bn in 2020 alone, Bezos could have used his years earnings to buy over a million gold bars. The average UK worker could also buy that many gold bars, but only if they worked for 1.7 million years consecutively, and then used every single penny of their earnings. Ouch.

Taller Than A Skyscraper? 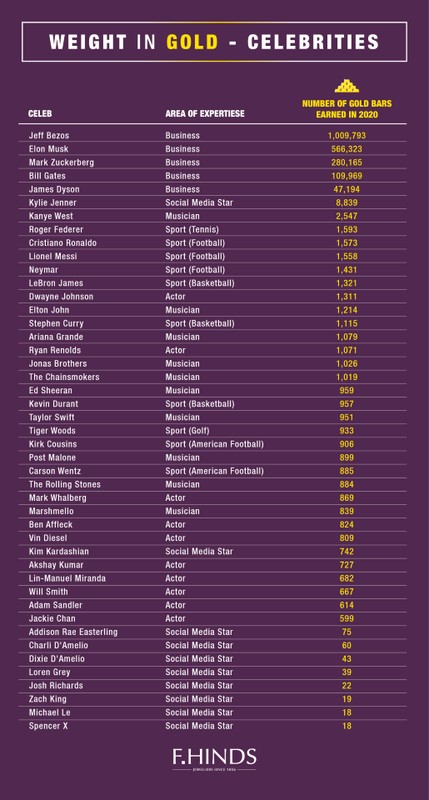 The Burj Khalifa in Dubai is the tallest building on Earth, standing at a whopping 828m. If Amazon’s Bezos was to spend all of his 2020 earnings on gold bars, he could create an 8,078m tall gold stack, almost ten times bigger than the Burj Khalifa. 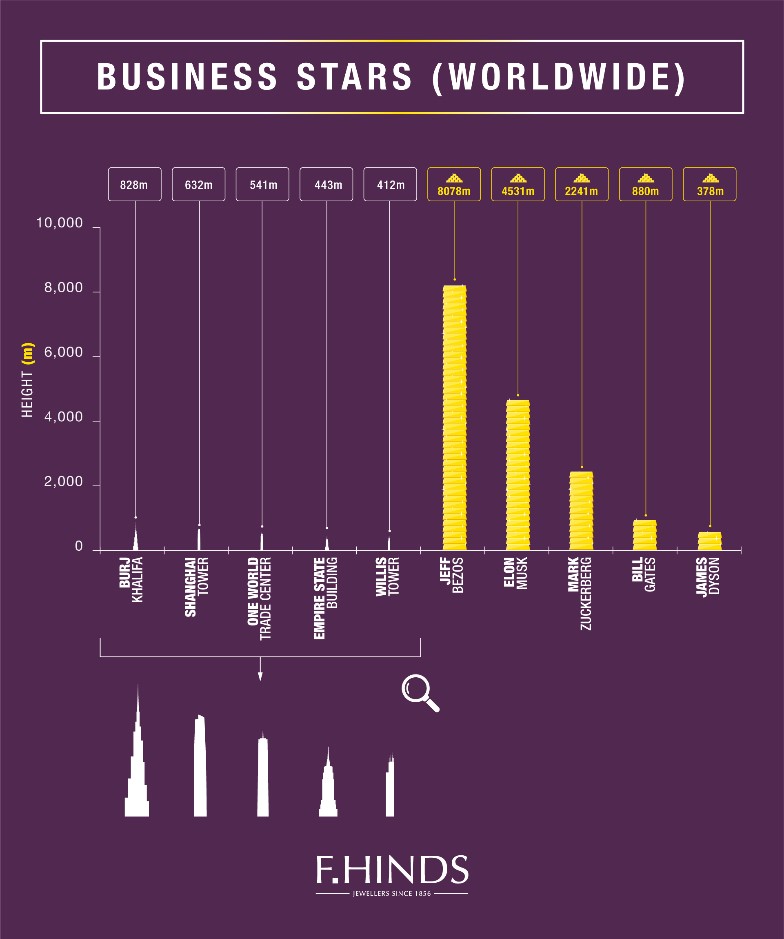 Dwayne ‘The Rock’ Johnson is the King of Hollywood right now, having earned £67m from his work in 2020. Johnson stands tall at 1.96m, and his acting work means that he could afford a tower of gold even bigger than he is. Johnson could spend his earnings on a 10.5m tower of gold bars, over five times taller than Johnson himself.

Lin-Manuel Miranda could buy a 5.5m tower of gold bars, over three times taller than his 1.75m frame. Jackie Chan isn’t the tallest fella at 1.74m, but his 4.8m stack of gold bars could certainly be tall enough. 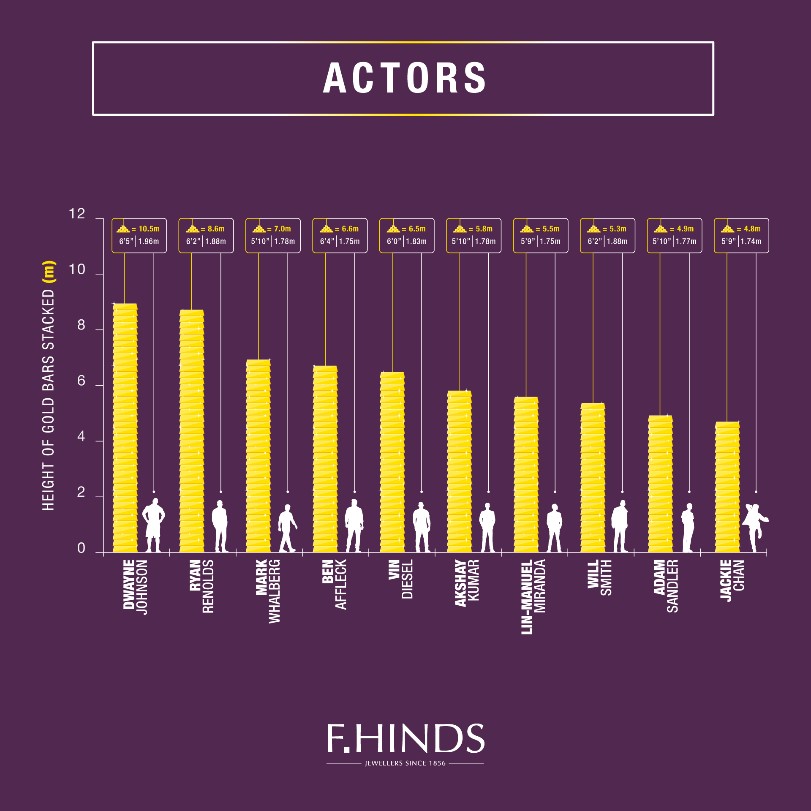 Cristiano Ronaldo and Lionel Messi are seen as two of the best football players of all time, and it is difficult to separate their achievements on the pitch. If you were to measure their potential stacks of gold bars, there isn’t much in it either. Messi is just 1.7m tall, yet his 2020 earnings could buy a 12.5m tower of gold bars. That is impressive, but he is just pipped by 1.85m Ronaldo, who could afford a 12.6m stack. There are rumours that Ronaldo will marry girlfriend Georgina Rodriguez sometime soon, and it certainly doesn’t seem as though the Portuguese star will be short of money for a ring.

Though the two football stars sit near the top of the leader board, they can’t quite take the top spot. That belongs to 1.85m tall tennis legend Rodger Federer. His 2020 earnings could buy him a 12.7m stack of gold bars. 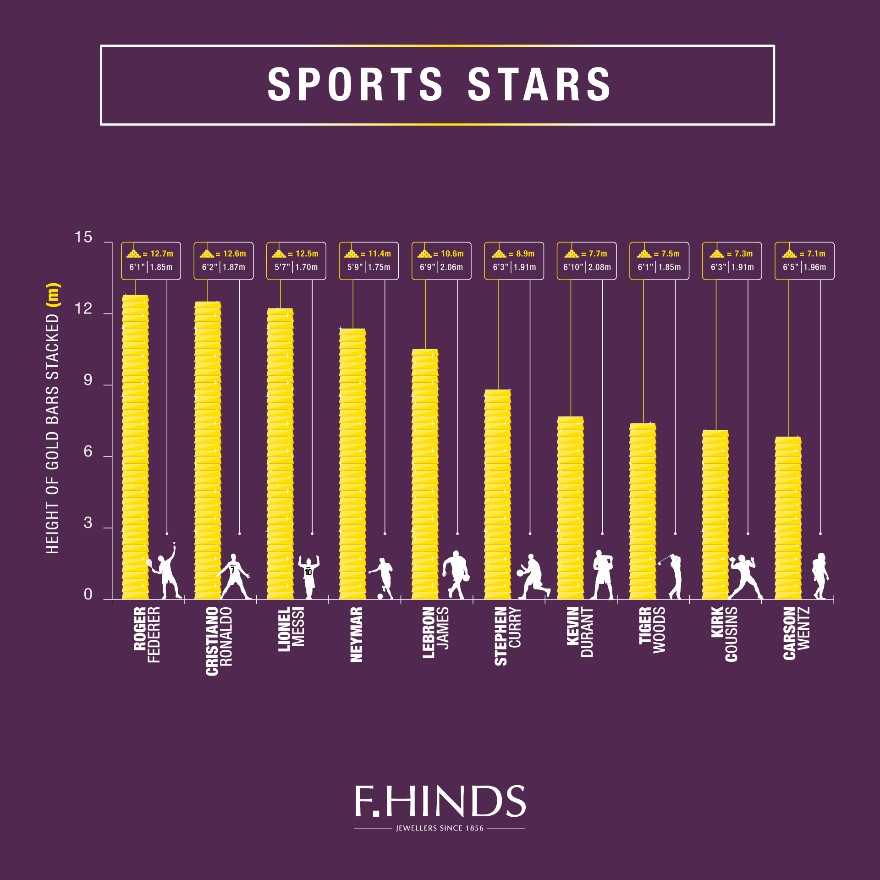 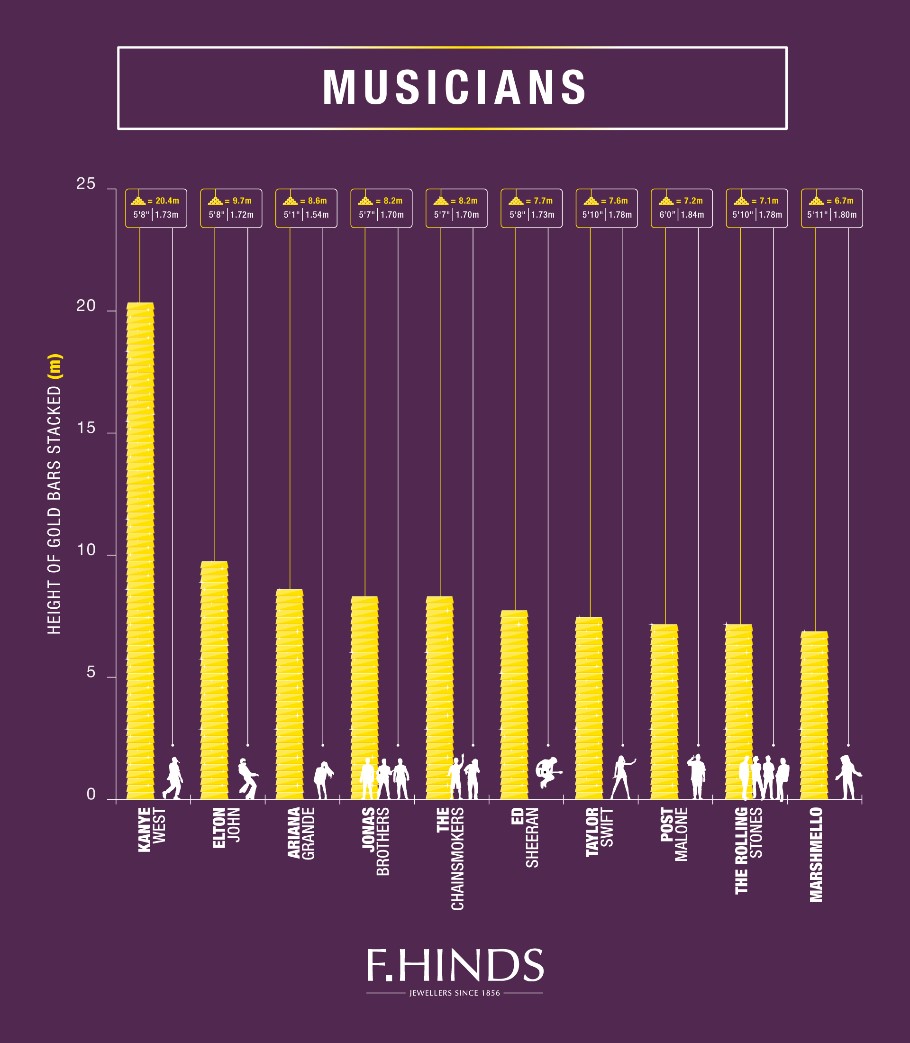 Most social stars found their fame using an iPhone, and Kylie Jenner isn’t short of a bob or two to buy herself a new one. As the highest earning social media star of 2020, Jenner could afford over 8,000kg of gold bars – by weight that is the equivalent of over 450,000 iPhones!
By comparison Kim Kardashian’s 2020 earnings could buy her 742kg of gold bars, the weight equivalent of over 38,000 iPhones.

The emergence of Tiktok has propelled a number of new stars onto social media platforms in recent years, but it seems they still have a way to go to keep up with the Kardashians. Addison Rae Esterling is leading the way in earnings for the TikTok generation, yet her 21 gold bars would only equate to 3,861 iPhones. 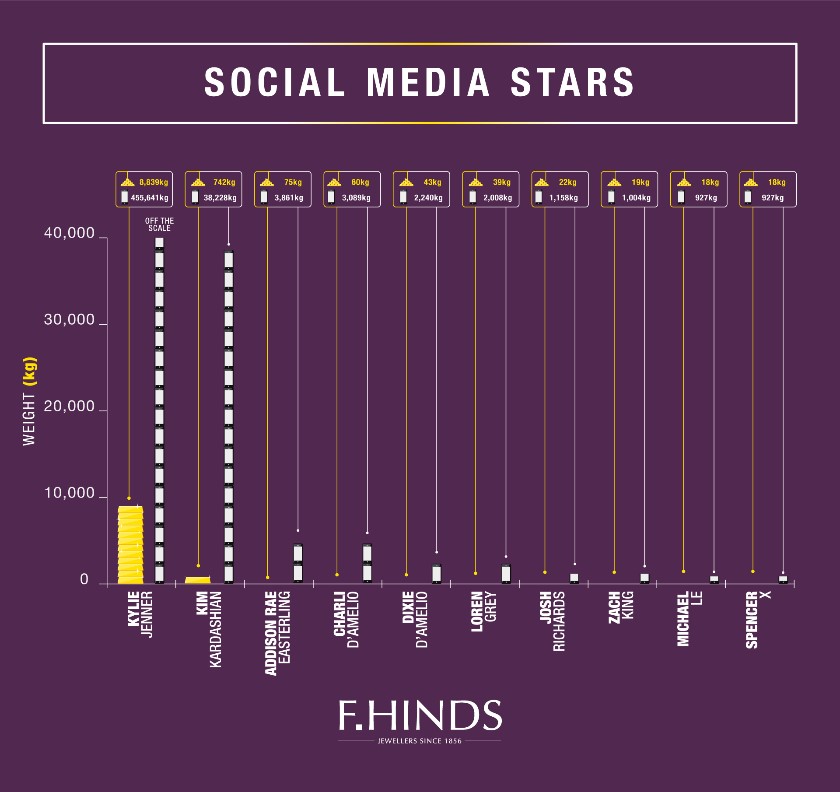 Gold is one of the most precious commodities on Earth, a fact that is underlined when you see that some big-name celebrities could afford less than 100 gold bars with their 2020 earnings. Whilst a gold bar might be out of the question for many of us, there are still plenty of ways to treat yourself to a sample of gold through our range of rings and watches.

If you do find yourself in the lucky position to have an excess of gold products around the house, you could always see how much your broken or unwanted jewellery and coins is worth with our Gold for Cash service.