Captain of the Black Pearl and everyone’s favourite loveable rogue, Jack Sparrow steals the show in all of the Pirates of the Caribbean movies. With his cheeky one liners and all that sparkling jewellery on show, his quirky and eccentric character has won critical acclaim.

As big fans of all things shiny, we thought we’d investigate just how much his iconic bling would be worth if purchased in today's market - just in time for the release of the newest film in the series, Pirates of the Caribbean: Dead Men Tell No Tales, out May 26th. 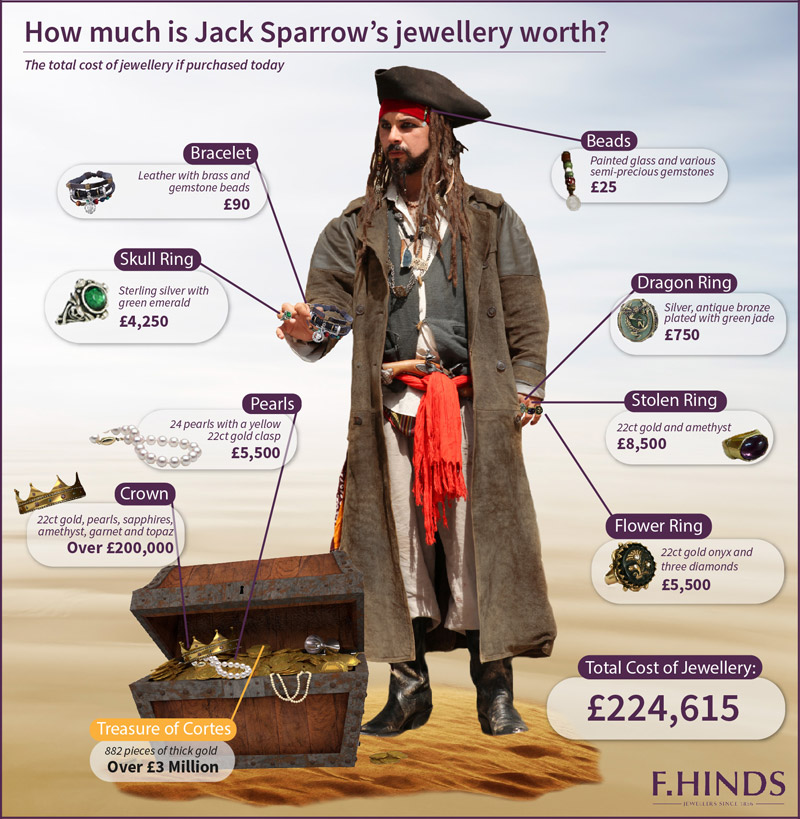 We’ve calculated that if made in today's market, a combined total of all his jewellery and treasure would equal a net worth of £224,615! Below is a breakdown of each individual piece and how much they would cost to buy today. His rings alone would cost a total of £19,000:

Jack’s sterling silver skull ring contains a single green emerald which alone, has a worth of around £3,250. Therefore for this one off, handmade bespoke piece, this ring would have an estimated retail price of around £4,250, making it one of his most prized possessions.

The ring Jack picked up in the Far East contains a mid-green jade stone measuring approximately 24 x 20mm. Unfortunately for Jack, it doesn’t look to be the best grade of stone or one of the most highly valued (as per the Chinese market where jade is most popular), having a value of around £750.

The 22ct gold ring Jack stole when he seduced a Spanish widow would cost around £5,500. The garnet-carved gemstone is set with diamonds, boasts a floral design and has an intricately patterned band that’s set with diamonds, all contributing to its high value.

The most valuable of all Jack’s rings has to be the stolen, Greco-Roman 22ct gold amethyst ring, mainly due to the weight of gold it contains. In Jack’s era, the rich purple amethyst stone would have been associated with royalty, boosting the ring’s total value to around £8,500.

Jack’s famous bandana beads are a combination of semi-precious gemstones and red patterned glass with a Burmese coin attached to the end. The value of the beads and bandana would be an affordable £25 to buy today.

Jack’s gold crown would be worth an eye-watering £200,000 or more! We compared Jack’s crown to a similar one that was donated to the Diocese of Rome which weighed 1.8kg and had a bullion (gold) value of £60,000 in today's money. Since Jack’s crown not only contains this amount of gold, it is also set with amethysts, garnets, topazes and a few other semi-precious gemstones which would would boost the price to well over £200,000+.

The worn leather bracelet with gemstone beads, a silver skull charm and a silver metal tube would cost around £90 should a replica be made today. This makes Jack’s staple accessory one that’s affordable to copy.

The 24 pearl necklace with yellow gold clasp would have a retail value of around £5,500 if we were using cultured pearls from the South Sea. However Jack's pearls would have probably been hand-dived for and therefore incomparable in today’s market.


The Treasure of Cortés: £3 million+

Jack’s treasure chest is jam-packed with 882 Aztec gold coins that measure around 4cm wide. We know that a Britannia coin measuring 3.2cm wide can be bought from bullion dealers today for around £1,020. As Jack’s coins are likely to be 50% wider and double the thickness, they’d be worth upwards of £3 million if you were to try and mint your own gold coins. This makes the chest by far the most valuable of all Jack’s possessions.


With all that gold stacking up to be worth so much money, it looks like a swashbuckling pirate’s life might not be so bad after all!
Back to Article Listing