In ancient times, a man's betrothed, or 'girl' wore a plaited band of rush, replaced each year for the duration of the engagement, to signify that she was no longer looking for a partner. Roman brides-to-be wore rings made of iron to symbolise the permanent, unending nature of marriage. During Medieval times, grooms-to-be placed the ring on three of the bride's fingers in turn to represent the Holy Trinity -- the Father, the Son and the Holy Spirit. In China, the betrothal was looked upon as a family obligation. If an engaged man died before the wedding, his intended bride was treated as his widow.

The betrothal ritual also involved an exchange of gifts or property from the groom-to-be to the bride-to-be's parents. This was not only ceremonial, but also an important part of the marriage contract because the bride's family was losing her to another family forever, and so sought compensation.

Nearly half of all betrothals or engagements occur between November and February. 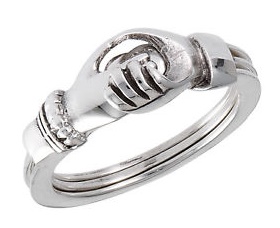 What is a gimmel ring?

1. The first describes them as rings in three parts styled with two clasped hands. During the engagement, one part was worn by the bride, one by the groom and the third by a witness. The three parts were then reunited as the brides' wedding ring, on the day of the marriage.

2. The second is that they were rings with two hoops that fanned open to reveal tiny figures - typically a baby and a skeleton, to represent the span of the couple's lives together - in little compartments under the gem settings.

What steps did history take to get to the lovely engagement rings of today?

In the 15th century, wealthy Europeans added diamonds to wedding rings to symbolise enduring conjugal fidelity; by the end of the 1600s, separate engagement rings began to appear.

Fashionable 17th-century rings had clusters of small table- or rose-cut stones in gold and enamelled settings. For two centuries from 1700 engagement rings featuring gemstones were popular. A very romantic touch was to use the first letter of the gem stone to spell out the name of the giver, the recipient or a word, such as "dearest" - diamond, emerald, amethyst, ruby, emerald, sapphire, turquoise. 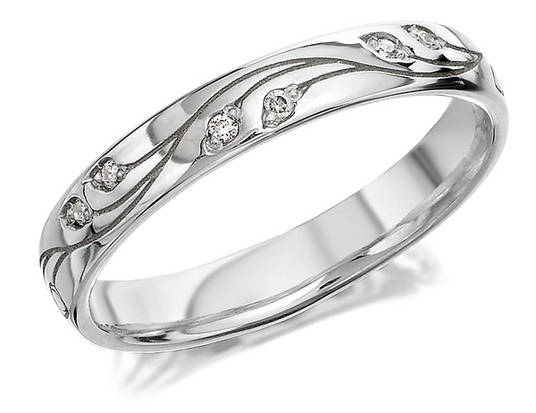 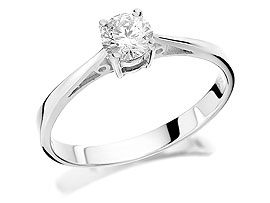 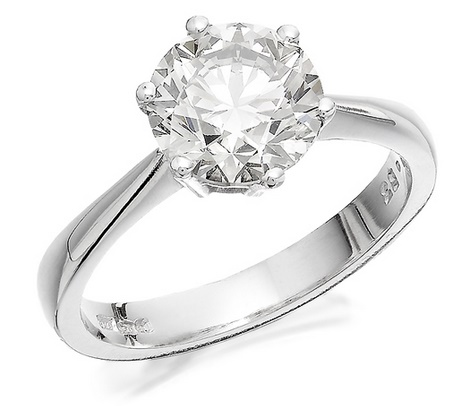 The origin of the diamond solitaire engagement ring

The diamond engagement ring as we know it has been around since 1477. Today it is the popular first choice as an engagement ring because of the beauty of the diamond, the symbolism of strength and longevity it represents, and as the ultimate token of love and affection. That’s why we say a diamond is forever.

Major diamond discoveries of the 1870s in South Africa meant that many more engaged couples could have access to and afford a diamond engagement ring. Modern diamond cutting techniques introduced in 1914 enhanced the gemstone's sparkle and fire.

The famous designer Tiffany then invented the six-pronged platinum setting that holds up a single diamond to the light. This was the last step that brought the solitaire engagement ring into the forefront of fashion, where it still is today.

We are proud to be able to offer a large selection of beautiful engagements rings. F.Hinds has many generations of experience in selecting and buying diamonds, many directly from the world's leading diamond bourses in Antwerp. We offer unbeatable value for all of the specially selected diamonds we sell, matching the quality of many that sell diamonds for much more and beating the quality of those who match our prices.

The Claddagh ring, steeped as it is in ancient and highly romantic Celtic symbolism, has recently become an attractive, alternative commitment ring.

The ring consists of two hands - representing friendship as the basis of love - holding or presenting between them a heart symbolising true love. Over the heart is a design representing a crown or fleur de lis - for undying loyalty; the two hands therefore hold love and loyalty together. Claddagh rings are sometimes engraved with the lovely phrase "Let love and friendship reign". As well as rings, Claddagh are also featured as lockets, bracelets and earrings, and can also be decorated with gemstones.

As you would expect there is a variety of fascinating tales that tell how the ring came into being, but this is the most romantic. The story beings about five centuries ago in the fishing village of Claddagh, just outside the city of Galway.

Nearly all of the men from the village were fishermen setting out every day to catch food for their families. It was dangerous to go out into Galway Bay, not only because of the vagaries of sea and weather, but also because on some days there were pirates. One day, a young man called Richard Joyce was at sea in his family's boat when suddenly a Spanish pirate ship appeared. All the men were captured, taken off to the north coast of Africa and sold into slavery.

Richard was enslaved to a Moorish goldsmith, from whom he learnt how to work gold, soon becoming adept and skilled. Every day, so the story goes, he stole a small speck of gold from his master's goldsmith shop. After many years he was able to make a ring that reminded him of his true love - parted from so abruptly all those years ago...

Some versions claim that Richard was freed by a royal edict of William III; others say that he escaped, but eventually he made his way back to Claddagh. On returning he discovered that his betrothed Colleen had waited patiently and faithfully for his return. Richard then presented her with the ring that is now known as the Claddagh Ring. Whether he brought the design with him or it was already established is hard to prove, but at F.Hinds we are sure that Colleen was delighted with her ring, traditionally worn with the apex of the heart pointing to the wearer's own heart.

Richard then set himself up as a goldsmith in Galway and prospered. Some of his work, stamped with his mark - an anchor for hope and initials R.J. - still exists, and to him is attributed the original Claddagh Ring.

The ring became popular outside Claddagh about the middle of the 19th century, as it was claimed to be the only ring made in Ireland ever to be worn by Queen Victoria and later King Edward VII.

As well as Claddagh rings, F.Hinds has a wide choice of jewellery bearing the ancient Celtic symbol of true love, friendship and loyalty.